∙ Rated 10 out of 10, based on 3 reviews ∙ See reviews
A wonderful day exploring the heart of the Amalfi Coast, visiting Amalfi, Atrani and Ravello 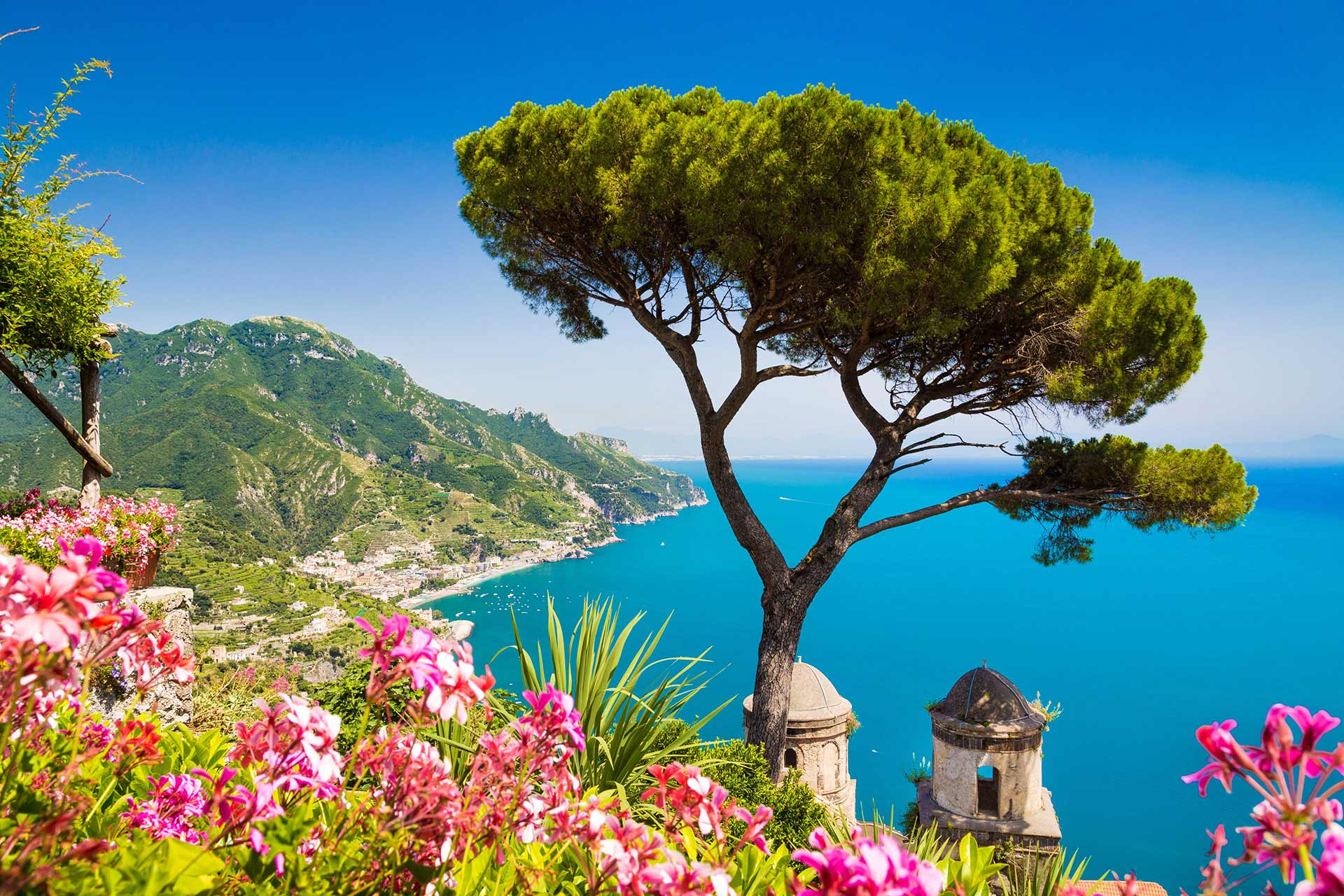 We recommend you to book this tour in advance for the following months: July, August.
Book this tour now, send us an email to info@livingamalfi.com or chat with us

Yes because - and we'd like to point it out - the tour lets you literally forget about the stress of finding a parking space available at each place where you want to stop, forget about when the next bus passes for the next place on your day planning, forget that driving among turns and turns is not exactly the same thing than driving on the highway. So, forget about all this. Literally.

Amalfi has Roman origins, but it had its heyday in the Middle Ages. It became an independent State on 1st September 839 with its own administration, depending only nominally from Byzantium. Amalfi was the 1st Maritime Republic of Italy. It fought versus Pisa, Genoa and Venice to control the sea traffic in the Mediterranean sea. The expert navigators from Amalfi invented the dry compass, which revolutionized the techniques of navigation. Amalfi minted its own currency since the first part of the eleventh century, the golden tarì, which had a good purchasing power. 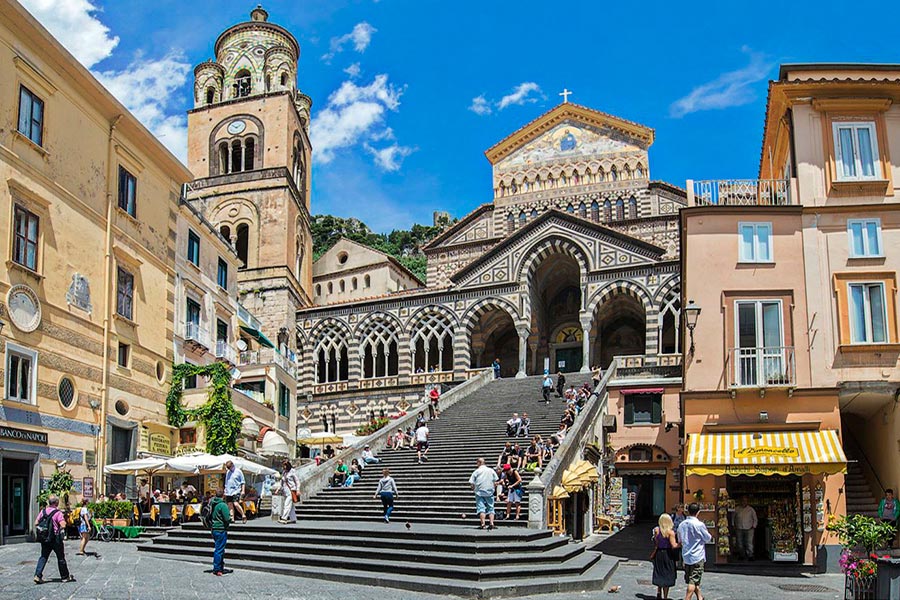 The Cathedral of Amalfi is an architectural complex consisting of two side by side communicating churches. The oldest, which now houses a fine museum of religious art, dates back to the sixth century, while the other, founded in 987, is dedicated to the Apostle Andrew.
The bell tower of the Cathedral was built in three phases: the foundation in 1180, the two-storey with double or triple lancet windows in 1190, the belfry in 1276 on the initiative of the Amalfitan Archbishop Philip Augustariccio. 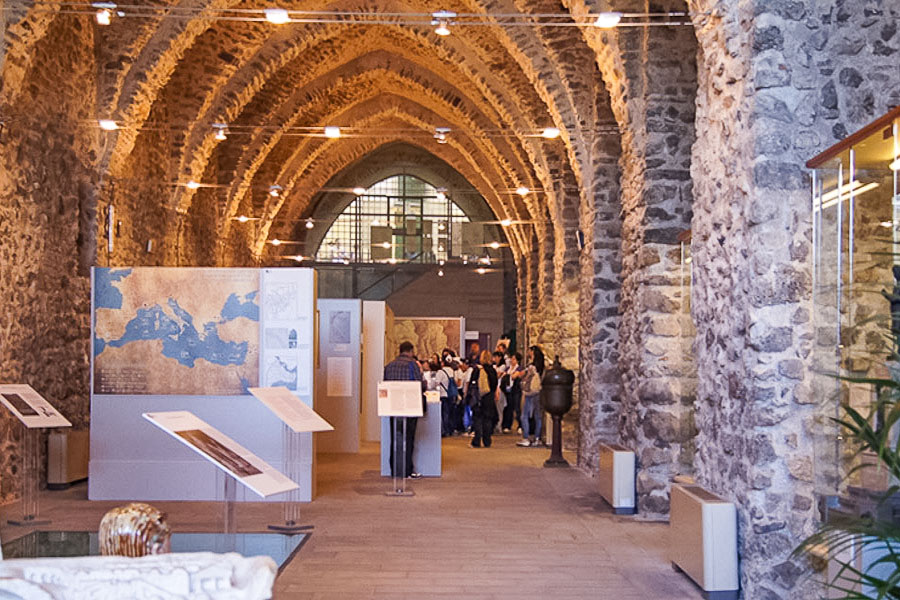 The Shipyard was built in Arabic style and is characterized by pointed arches and vaults. It consists of two lanes separated by ten pillars; before 1343 it was twice as long and had a third lane. On that date, a powerful sea storm destroyed half of it. It turns out to be the only almost intact existing medieval Italian shipyard and now is home to the "Museum of the Compass and the maritime Dukedom". 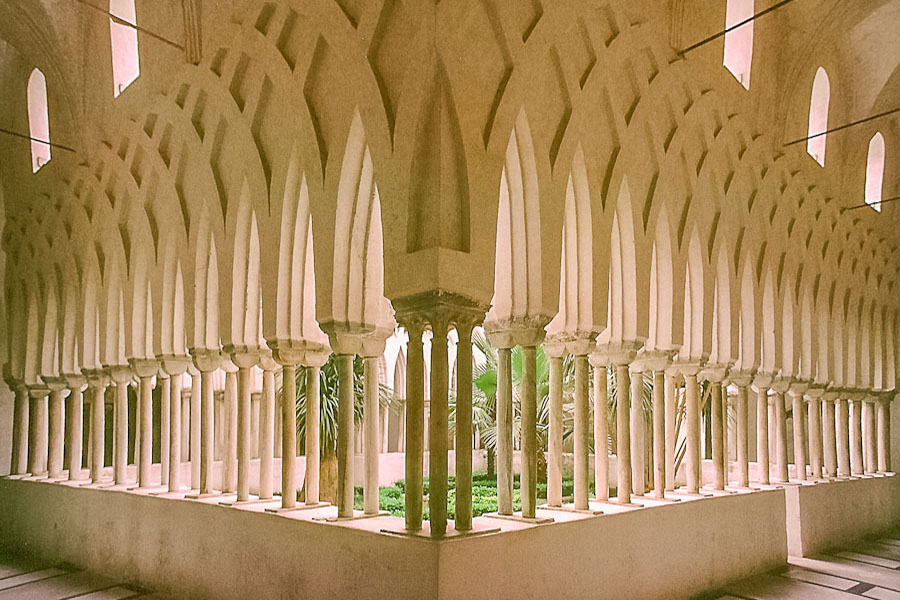 The Paradise Cloister was founded in 1268 by Archbishop Philip Augustariccio. Until the sixteenth century it was the cemetery of the Amalfitan nobility. 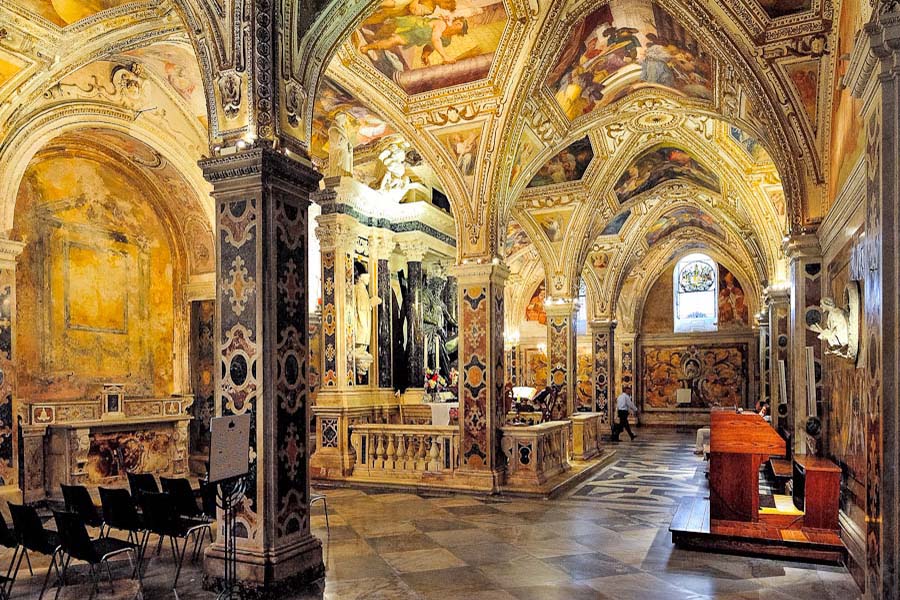 The Crypt was built in 1203 and, since 8th May 1208, it houses the remains of St. Andrew the Apostle, brought from Constantinople by Cardinal Pietro Capuano from Amalfi on the occasion of the Fourth Crusade.

Atrani is one of the smallest towns in Italy for extension and also one of the most densely populated. It opens onto the sea taking the form of a antrum, for which its founders attributed this name, according to a tradition dating back to the tenth century. Atrani looks like a nativity scene made of white and narrow alleys and quiet paths. The Atrani people are respectful of the guests who can benefit from the pleasantness of the place and a sincere and friendly welcome. The square is a true lounge outdoors, loved by travellers and many international filmmakers. 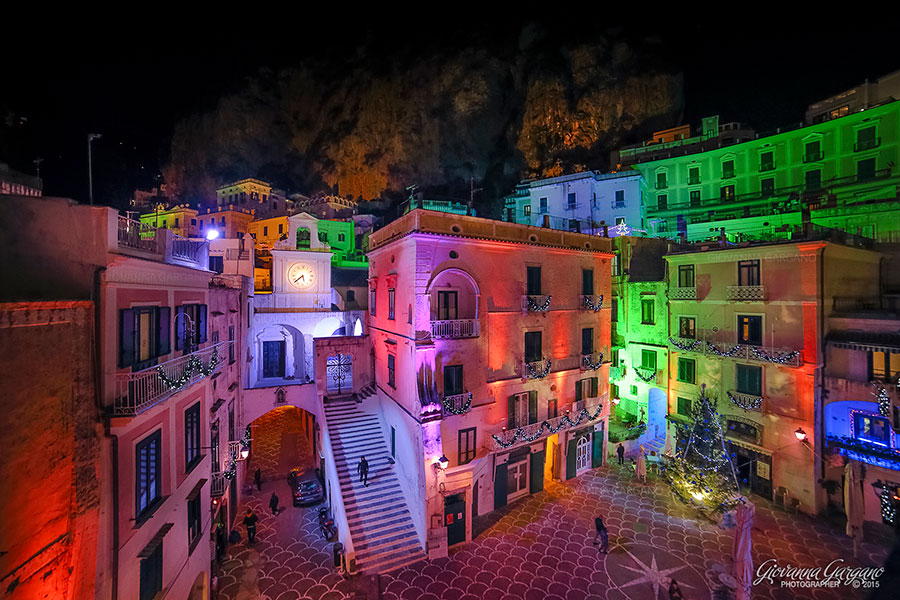 The church of San Salvatore de Birecto in Atrani was the palace chapel of the Dukes of Amalfi, in which they were crowned. The church dates back to the tenth century and has a central plant of Byzantine style. The bronze door was given by the wealthy merchant Pantaleon Viaretta in the year 1087. 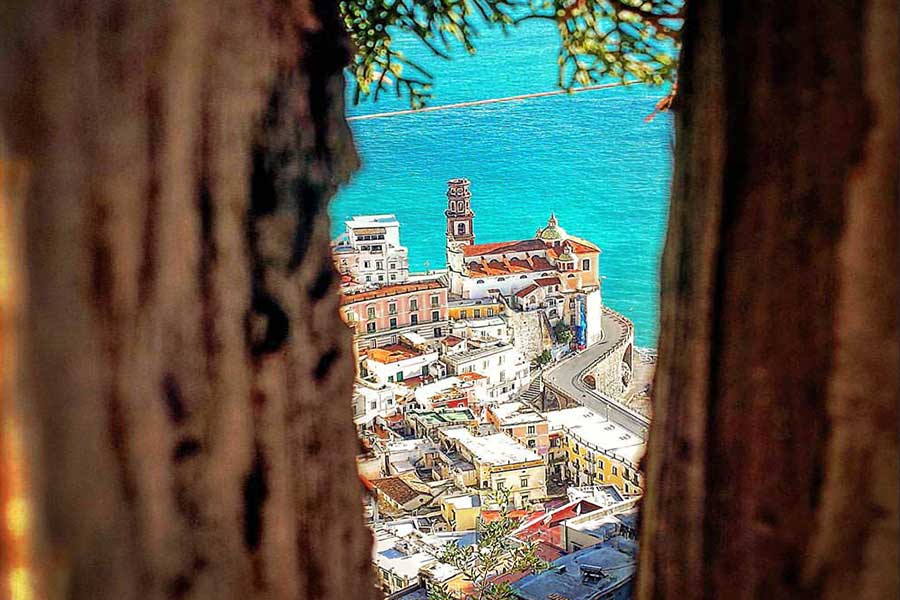 The church of Santa Maria del Bando dates from the twelfth century, and was so named because from its summit the public tenders were launched. Next to it there is a cave where, according to the tradition, Masaniello sheltered before dying on 16th July 1647. 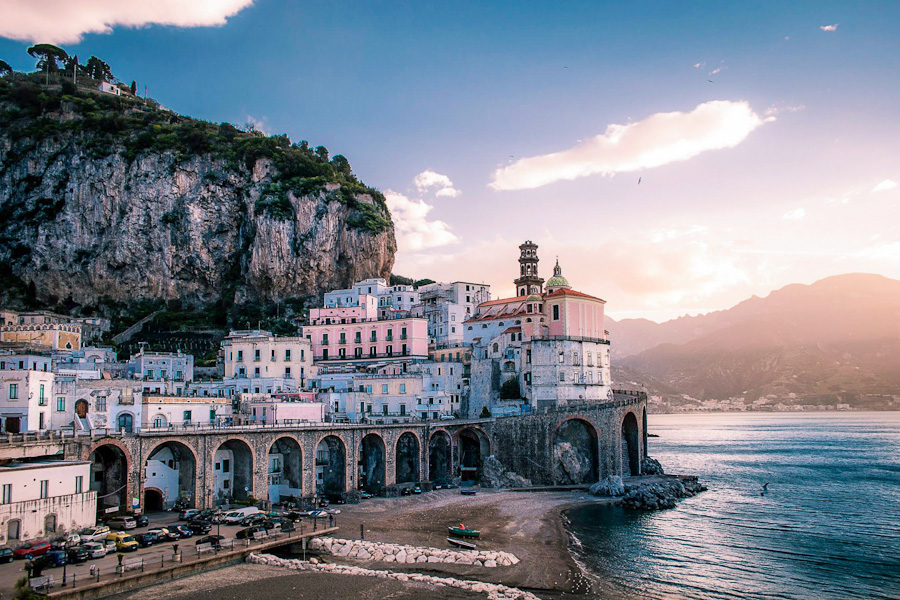 The Collegiate Church of St. Mary Magdalene (Santa Maria Maddalena) was founded in 1274 on the ruins of a medieval castle. Today it has a Baroque style and its entrance opens to the sea in a way that you’ll love forever.

Ravello will thrill you with its melancholy tones and timeless beauty. The history of Ravello is linked to the noble family of the Rufolos, whose members where bankers of the Angevin kings of Naples (XIII-XIV cent.). The monuments worth a visit are at least the Cathedral and the Rufolo and Cimbrone villas. 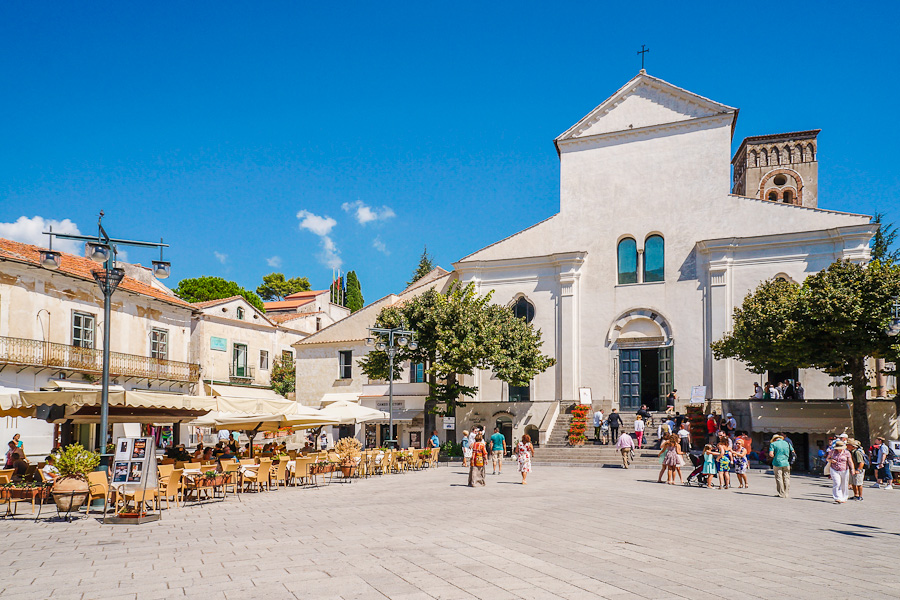 The Cathedral of Ravello was founded in 1086 by the bishop of Ravello Orso Papice. The Crypt houses the Cathedral Museum, where they kept relics of historical and artistic medieval Ravello.
The Art Gallery houses works of art from medieval and modern religious topics. Among these is particularly important the marble bust of a crowned woman, which is traditionally identified with Sigilgaita de Marra, wife of Nicola Rufolo. 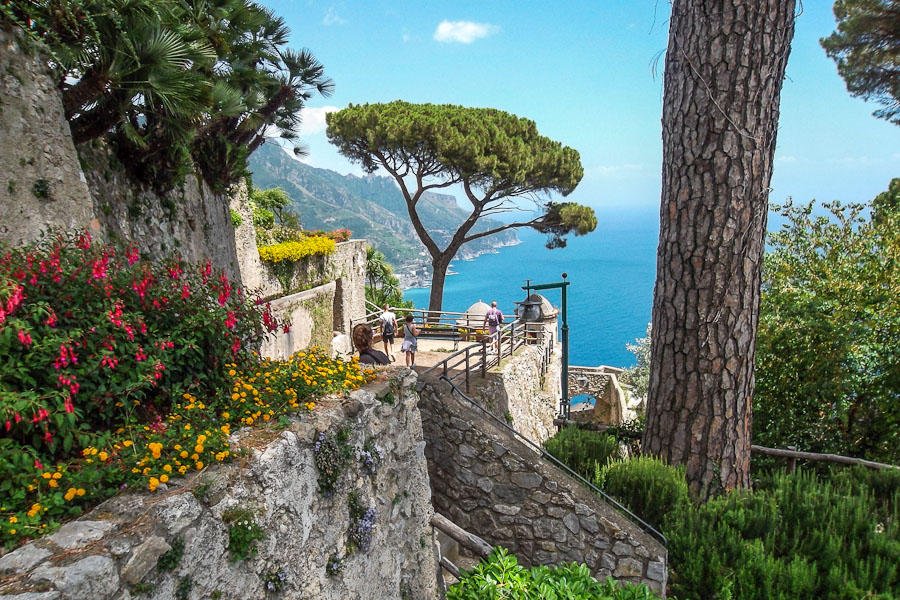 The Villa Rufolo in Ravello was the town residence of the Rufolos, the most powerful noble family. Its construction dates back to the late thirteenth century, when the Rufolos assumed considerable importance in the Kingdom of Sicily. The building is fortified: in particular two towers were raised. Inside the Villa there is a wonderful cloister dating back to the early fourteenth century, in Moorish style. During the nineteenth century the villa was owned by the Scottish Neville Reid, who beautified it with colorful floral gardens, in which Richard Wagner found inspiration for the "Garden of Klingsor" of his "Parsifal". 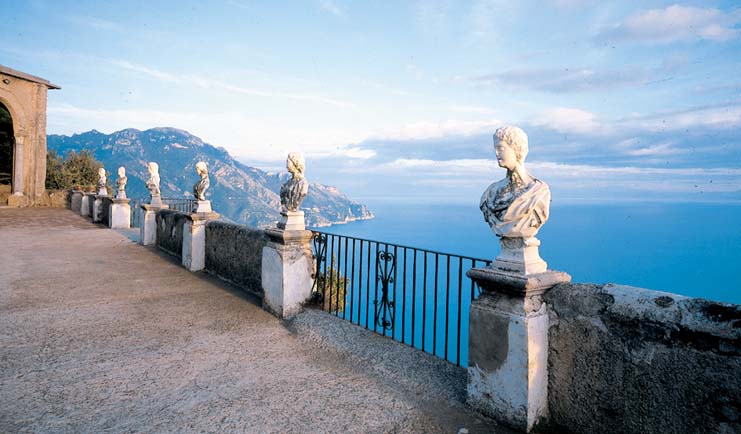 The Villa Cimbrone in Ravello takes its name from the place where it rises, which once was a wide forest. It has been enhanced especially during the nineteenth century by the Romantic poets for its breathtaking landscape. 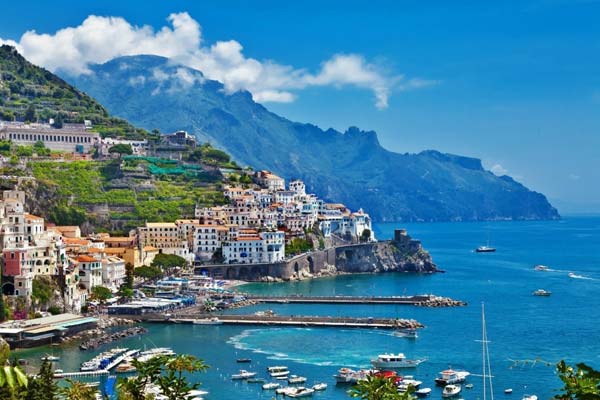 Words will never be enough to describe the beauty of these blessed places. Nature perfectly joins the architecture of the towns on the coast, giving us back stunning landscapes. This tour is a must! Avoiding the stress of taking diffrent means of transport, you are able to visit the main places of interest on the Amalfi Coast in a day. Not to mention the driver: the best.
⎯ Yoshiko

We want you to relax. In this way you can enjoy the best of the Amalfi Coast from any starting point you prefer.
Your personal driver will meet you at the address you give him.

Ok perfect, can I choose the start time too? Of course, and let us give you some tips. If you choose a tour lasting eight hours, then you might meet the driver between 8 am and 10 am, so as to optimize your day. If you choose, instead, a tour lasting five hours, you can decide whether to do it mainly in the morning or in the afternoon, so as not to take time away from the tour for lunch.
In any case, whatever time of the day you choose, your personal driver is always ready to meet your needs.

Usally the Amalfi Coast Tour lasts from five to eight hours. Anyway, you are free to customize its duration.
Additional hourly fees may be applied before 8 am and after 8 pm.

Wear the essential because you will walk a lot, especially in the town centres, monuments and museums. If you are taking the tour in July and August, wear a hat for the sun and shorts for the heat. From June to September the weather on the Amalfi Coast is usually warm and sunny.

Here is a table by ilmeteo reporting the medium temperatures on the Amalfi Coast during the last 3 years:

This is easier than to decide where to go and for how long, isn't it? Whether you need further information, or customize your Amalfi Coast Tour, we're always here to help you. Just send us an email to info@livingamalfi.com or chat with us now.
Are you ready instead? Well, don't waste time, choose your tour features and get a confirmation now.


REVIEWS ABOUT THE Amalfi Coast Tour

Yoshiko from Japan
breautiful
Words will never be enough to describe the beauty of these blessed places. Nature perfectly joins the architecture of the towns on the coast, giving us back stunning landscapes. This tour is a must! Avoiding the stress of taking diffrent means of transport, you are able to visit the main places of interest on the Amalfi Coast in a day. Not to mention the driver: the best.

Ask for tour rates and availability 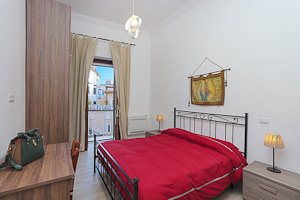 Amalfi Central Apartment, Apartment in Amalfi, accommodates up to 4 guests. 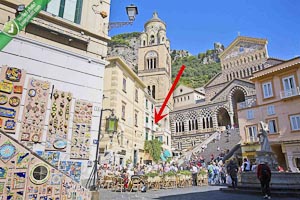 Amalfi Central House, Apartment in Amalfi, accommodates up to 4 guests. 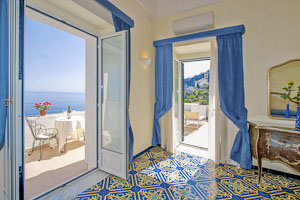 
Let's live it together!

Subscribe now to our Newsletter and get a special offer!

Secure payments with us